The reactions of a 5 year old kid.

The Faroe Islands Podcast, feels obligated to tell the story of this little 5 year old kid, from Skopun, Sandoy, and his reaction to the horrific actions in Norway.
The family says: "Our son, Ísak, 5 year old, which is ½ norwegian, has understood that something terrible has happened in Norway, in these last few days. He surprised us last night, after he'd been playing outside, he called us out, to witness a memorial site, which he himeself, without encouragement, had built."
Ísak told the family: "This memorial, is for all of those who are crying in Norway, because an evil man has shot Norway. Later he said, that when they see this memorial, they will know that Jesus is comforting them."
source: http://aktuelt.fo/grein/minnisvardi_fyri_oll_tey_sum_grata_i_norra
Posted by Tollak at 12:38 AM

This week, we talk to the G! Festival's organizer about this year's lineup and acts to watch for. As always, you can listen on iTunes, on the media player above, or you can download the show directly here:
http://traffic.libsyn.com/faroepodcast/Podcast_102.mp3
Now it's off to cover the G! Festival in Gota, which starts in just a few hours. We'll have full coverage in the weeks to come.
Posted by Workman at 3:28 AM

Our good friend Danny Robins is on a mission. He's got a week to be famous in the Faroe Islands. So he's made a quite good music video and is trying to get 48,819 views on YouTube, one for every person in the Faroes.
We at the Faroe Islands Podcast wholeheartedly support the lovely and talented Mr. Robins in his quest. So help him out by watching the video below and giving it a thumbs up on YouTube. And even if you don't care about helping Danny, you should watch anyway. It's quite funny.
Also, there's a URL associated with this video, you can go to: http://www.faroeislandsrap.com
Posted by Faroe Islands Podcast at 5:21 PM 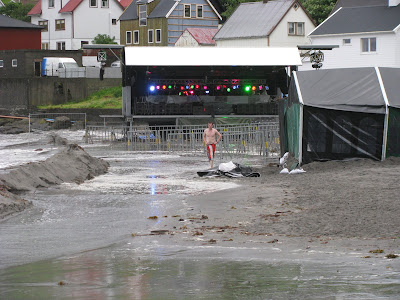 In preparation for this year's journey to the Faroes, we take a look back at last year's G! Festival. The three-day event was almost derailed by a massive storm that damaged the campsite and washed away most of the beach at Gota.
Festival organizer Jon Tyril takes us through the events of that tense first day and explains how the festival ended on a high note.
As always, you can listen on iTunes, or on our media player. Or you can download the show directly here:
http://traffic.libsyn.com/faroepodcast/Podcast_101.mp3
Posted by Workman at 2:51 AM