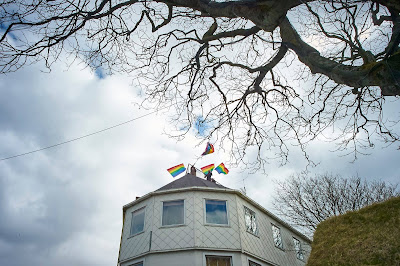 On Friday morning, the Law Thing voted to legalize same-sex marriage in the Faroe Islands. This historic vote was a long time coming, and in honor of that we're reposting one of our favorite episodes of the podcast.

In 2012, LGBT Foroyar organized a Pride march that seemed quite ambitious at the time. They wanted to get 1,000 people to march for gay rights in a country that only has a total population of around 49,000.

Previous marches were much smaller affairs. One person described them as, "A few dozen people shuffling down the sidewalk staring at their shoes." With that in mind, 1,000 people seemed like a lot to ask for, and if you talked to organizers off mic, they'd say that they'd be pleased if 500 people marched.

On the day of the march, 5,000 people showed up. There was a feeling that history was being made.

As luck would have it, we got an excellent recording of what happened at the march and the surprise of participants and journalists alike at the large turnout.

Take a listen and relive that moment Turns out, it's even more fun to listen to when you know how the story ends.
Posted by Workman at 11:33 AM

On this week's show, we visit Stora Dimun. This small island is home to just two families and most Faroese people have never been here.

We'll ride a helicopter across some spectacular scenery before taking a hike down to the shore and putting away some waffles and bacon.

As always, you can listen on iTunes, on Stitcher Smart Radio, or you can download our show directly here.
Posted by Workman at 11:15 AM